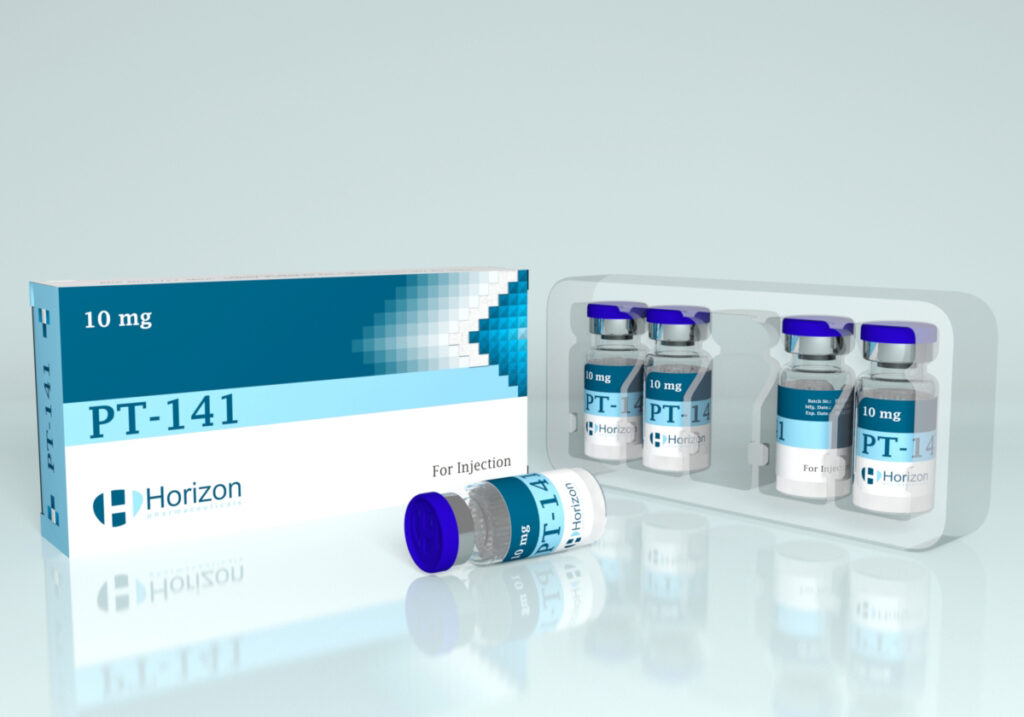 Bremelanotide (PT-141) was developed from Melanotan 2 (MT-II). PT-141 is a metabolite of melanocyte stimulating hormone that targets desire.

Treatment: PT-141 is the only synthetic aphrodisiac. The aphrodisiac effects of Bremelanotide are in a class of its own. Studies have shown Bremelanotide to be effective in treating sexual dysfunction in both men (erectile dysfunction or impotence) and women (sexual arousal disorder). Nine out of ten volunteers experienced sexual arousal in clinical trials. Unlike Viagra and other related medications (PDE5s – blood pushers), PT-141 acts upon the nervous system. Viagra, Cials and Levitra are not considered aphrodisiacs as they do not have any direct effect on the libido. However, treatment with PDE5 inhibitors and PT-141 have known synergy.

Men’s Journal Magazine: …it took hold. I felt a great surge of affection (greater than any regular level of arousal). My body tingled and I developed an erection that wouldn’t quit. For two hours the drug wouldn’t let me out of its grasp — nor my wife out of mine. -Frederick Kaufman

Females: Women who took part in trials said that they felt a “tingling and a throbbing” along with “a strong desire to have sex.” An initial flush occurs post injection, followed by nausea which is dose dependent. For most, effects generally do not take place until a couple hours post injection, peaking around the four hour mark. Men said PT-141 made them feel “younger and more energetic” as well as sexually interested and aroused. “You’re ready to take your pants off and go,” said user “a drug that makes you not only able to but eager to.”

Bremelanotide PT-141 Peptide: Bremelanotide comes in 10mg vials. As a lifestyle peptide, the 10mg product is a lot to consume and may offer up to 20 doses when dosing light. The PT-141 peptide reconstituted with bacteriostatic water remains potent in the fridge for months.

Window of Opportunity: Bremelanotide, injected (subcutaneously), has a unique window of opportunity lasting six to 72 hours. In lab trials female rats exposed to PT-141 began “flirting” with male rats for sex. Postures and movements left no doubt in the male rats minds that they were in the mood. The human PT-141 date is one where the dosage precedes the activity by at least a couple hours. When the stars align, hours after the injection, …this is your window of opportunity, enjoy.

The preferred method of calculation is reconstituting the 10 mg PT-141 vial with 2 ml sterile water or bacteriostatic water. A little tip here is to clean the top of the vial with an alcohol swab to remove any contamination from bacteria before reconstitution.

The reconstituted solution of PT-141 should always be refrigerated at around 8 degrees Celsius before and after its use. The solution should not be exposed to direct sunlight or heat as it can change the properties of the solution.